Alice C. Thompson Schwartz Berreth passed from this world on January 31, 2022 at the Good Samaritan Nursing Home in Mott, ND at the age of 104.

Alice was born on March 16, 1917 to Iva (Bratcher) and Thomas Thompson on their farm in Adams county. She attended country school and graduated from Mott High School in 1935.

In 1938 she married Roland Schwartz. They made their home on the farm south of Mott. Three children were born; Leslie Sloan, Sylvia Payne and Paul Schwartz. Roland passed away in 1965. She married Rueben Berreth in November 1966 and added a stepson, Gary Berreth. Rueben passed away in 2008.

Alice and Rueben retired from farming and spent their time traveling and wintering in Arizona. She had many hobbies – riding horse, playing bridge, tennis, golf and crafting. She stayed active until entering the nursing home in 2010.

Alice is survived by her children, seven grandchildren and fifteen great-grandchildren. Cremation has taken place and a memorial service will be held at a later date.

Cremation has taken place and services will be held at a later date. 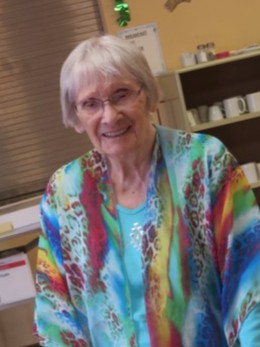