Raymond Frank Braun, 86, of Redmond, passed away from stroke complications with family by his side. The second of 9 children, Ray married high school sweetheart JoAnn Skachenko, also of Killdeer, North Dakota. Ray played football, baseball, and wrestled while earning a degree in biology and education from Dickinson State University, North Dakota. Ray taught biology and coached high school football and wrestling. Ray earned a master’s degree at North Dakota State University and was a PhD candidate at the University of Northern Colorado. The high school football team of Richardton Abbey, North Dakota went unscored upon, and his Baker Montana High School team was also an undefeated state champion.

Ray enjoyed the challenge of elevating football programs and had the opportunity to build and improve willing traditions at the university level while he and JoAnn, a surgical nurse, raised 5 sons. Ray was the defensive secondary coach for the National Champion North Dakota State University Bison teams of 1967 and 1970 and is in the Bison Hall-of-Fame. Ray was the defensive coordinator for Washington State University with 2 Apple Cup victories over the University of Washington in 1972 and 1973. Ray was the defensive coordinator for the Oregon State Beavers that battled the Oregon Ducks to a 0 to 0 tie in the famous ‘Donut Bowl’ of 1983. Ray aspired to coach at the professional rank and was with the 1986 and 1987 NFL Cleveland Browns that were AFC Central championship teams, then coaching in two Pro Bowls. Ray and JoAnn moved back to Oregon where he again taught and coached at high schools, Arena football in Oklahoma City, and two seasons coaching American football in Austria. Ray considered his time coaching at Hermiston High School and Redmond High School impactful, not only in results, but also in seeing community involvement, and civic pride in their athletic programs. Ray coached at Hermiston in 1991 and 1992 and enjoyed working there again later in the decade.

Coaching the competitive Redmond High School Panther teams of 1993 and 1994, and the idea of living near the beautiful mountains of Central Oregon eventually brought Ray and JoAnn back to retire in Redmond. Skiing was their passion, and golf was his full time job. In the span of a decade, Ray won several senior tournaments. Ray hit 3 hole-in-ones, countless birdies, and one unfortunate Canadian goose on the #2 Canyon Hole at Eagle Crest Resort that recovered after making a poor choice of flight path.

Ray was an educator and coach to thousands of students and players. He prepared to win and encouraged excellence, using football as a metaphor for life. Students, players, and coaches maintained their friendships with Ray, enjoying his wit, thoughtfulness, and sense of humor. Ray and JoAnn have 9 granddaughters, one grandson and two great-grandchildren that bring them great pride and joy. With the friendship of fabulous neighbors, and fellow parishioners of St. Thomas Catholic Church of Redmond, Ray and JoAnn enjoyed an active social life that enhanced his last 6 wheelchair bound years. Former players describe Ray as a fierce competitor, a compassionate ‘player’s coach’, and a solid role model in their development. Friends describe Ray as a loving, caring person who enriched their lives in so many positive ways.

As longtime parishioners of St. Thomas, an 11:00 am Saturday, December 10th requiem Mass will follow a Rosary with a luncheon in the Parish Hall. The cowboy is returning home. A second requiem Mass will take place at St. Joseph’s Catholic Church in Killdeer, North Dakota., where Ray and JoAnn were married 65 years ago. That Mass will be on July 1st, at 11:00 am, following a Rosary at 10:30 am. Inurnment will be in the Oakdale Cemetery near the  base of the Killdeer mountains.

Ray, the light of God surrounds you; the love of God enfolds you; the power of God protects you; and the presence of God watches over you.

Ray kept the faith diligently, he fought the good fight unceasingly, and he finished the  race peacefully.

Details can be found at www.bendfuneralhomes.com/obituaries/obituary-listings. 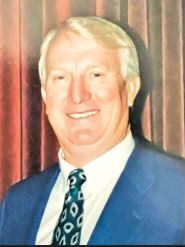