Our wonderful mother, Tillie Hauck, formerly of Richardton was greeted by Heaven’s angels on Monday, November 14, 2022. She passed away at Evergreen Assisted Living with family by her side. Tillie’s Mass of Christian Burial will be at 9 a.m. MT, Saturday, November 19, 2022 at St. Mary’s Catholic Church in Richardton with Fr. Thomas Wordekemper, OSB as celebrant. Interment will take place at St. Mary’s Cemetery, Richardton. Visitation will be from 4 p.m. to 7 p.m. on Friday at Ladbury Funeral Service, Dickinson with a rosary and vigil at 7 p.m. with Deacon Bob Stockert presiding. Visitation will continue one hour prior to the service at the church on Saturday.

Tillie Koch was born to John and Catherine (Staudinger) Koch on May 4, 1925 at home on a farm north of South Heart. She was the fourth oldest of nine children. She went to country school until the sixth grade when her family moved to her uncle’s farm north of Richardton in 1937. She then went to St. Mary’s school. While a senior in high school, she was in the church choir and worked at Wini’s Café as a waitress after school and weekends. She graduated from high school May 1944.

Leo and Tillie were in the dairy business. They sold cream and later switched to selling milk. They retired into Richardton and moved into their newly built home in March 1975. After first living in a stone house, and then an old school house, what a joy this new house was.

After moving into Richardton, Tillie worked as a cook at the Richardton Hospital, retiring due to her health.

She was a member of Christian Mothers, Richardton Senior Citizens Club where she held various positions, cleaning, president, secretary, and treasurer. She was a rosary leader at St. Mary’s Catholic Church and at Evergreen. She loved to bowl and was the secretary for the Senior Citizen Bowling League until it closed. She was a volunteer for RSVP for over 42 years and volunteered at Evergreen for many years as well. She was chairman for funeral lunches at St. Mary’s Church.

Tillie loved to garden, where she would raise many fruits and vegetables, and flowers. She enjoyed putting picture puzzles together and made quilts for all her children and grandchildren. She crocheted many afghans and embroidered dish towels. She liked to read, play cards, especially Bingo and Pokeno. She was a pro at finding words in Word Search and could find them faster than her children and grandchildren at times, even to the end. One of her greatest and last joys was to meet her first great-great-granddaughter.

Tillie moved to Evergreen October 25, 2010. She liked it there and helped whenever she could. She took part in most of the activities. The family would like to thank all the staff and residents of Evergreen for their support and love that has been a part of our lives for the past 12 years.

The family requests memorials be sent to the Richardton St. Mary’s Church or St. Mary’s Cemetery. 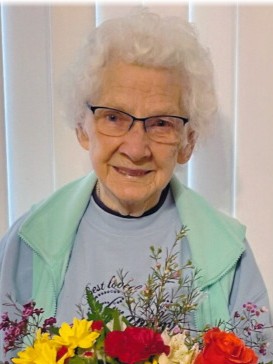